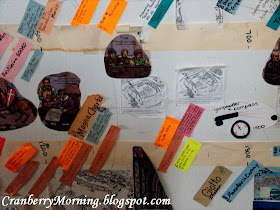 Believe it or not, that is one segment of a homemade history timeline that our family made during the years we homeschooled the kids (21 years in all!)  The photos below are not in order, and are only a few segments of the timeline, but they give you a general idea of what we did to construct our history timeline.

So why make your own timeline when there are others available for purchase? After all, it's a lot easier to hit the 'Buy Now' button than it is to do the work of actually cutting out pictures and making date tags. 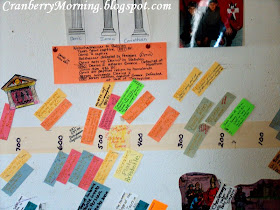 I had seen history timelines that could be purchased, ready to place on a wall. I had also seen timelines that were in book form. BUT it seemed to me that it would be much more helpful to the learning process if we could actually make our own timeline, putting up adding machine tape in rows (7 in all) across  two adjacent walls in our school room, and adding our own tags and pictures. 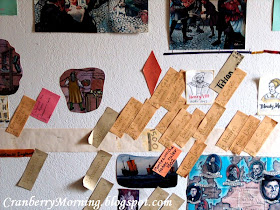 As we studied something, we would cut pictures out of old National Geographics we got from library sales (not touching their duplicates which sat on our bookshelves), and would staple tags onto the wall. So yes, we still have the bookshelf that contains about 18 linear feet of those yellow-covered magazines.

I'm sure that now we could simply go online and find all the pictures we needed, could download them and print them out. Things have come a long way since we started homeschooling all those years ago. 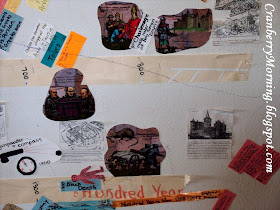 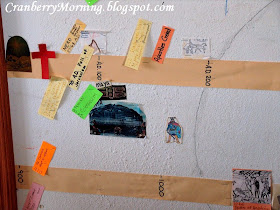 I think some tags fell off this one. 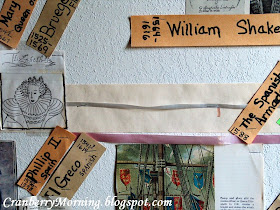 The colored ribbons were stapled from one date to another to indicate the years covered by the reign of that particular monarch. 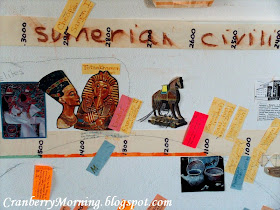 As I said before, these are not in order. But you will notice that in the years B.C., the dates on the adding machine tape were much closer together than they were between A.D. 1500 and A.D. 1600, for example. We had a lot more information for that time period and needed more space in which to place our pictures and tags. Still, once we went to a wider spacing, we kept that uniform for the remainder of the timeline. 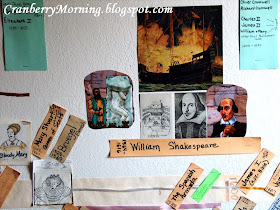 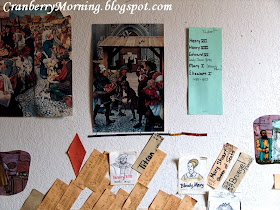 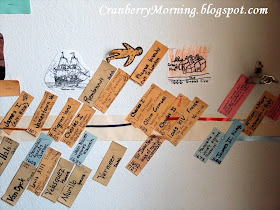 Evidently that poor guy lost his right foot during the Plague that struck London in 1665. A plague and a fire. Why is this making me want to visit England again??

Yes, we did study American history, and those lines ran beneath this timeline, concurrently, so that you could see, for example, what was going on in the world at the time that Jamestown Colony was being established.

Aside:  When Jamestown was established, by the way, Pandy Inn in Dorstone, Herefordshire, had already been a free house for 500 years - and still is. But that wasn't on our timeline. 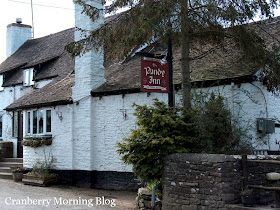 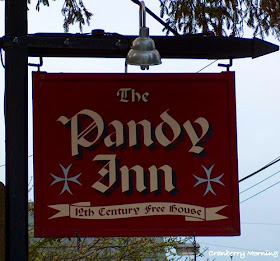 Did you notice with what little encouragement my brain turns to England?? It's pathetic, isn't it!

By the way, it's a great idea to make a timeline even if your kids aren't in school at home. It's a fun project for everyone involved, it's inexpensive, and it's a very effective learning tool. 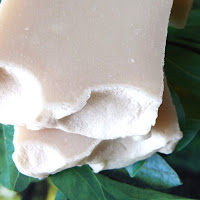 On all our handcrafted soaps at
HomemadeSoapNSuch

This post may be linked to some of the following: Mop it Up Monday  and  Cure for the Common Monday and Mealtime Monday and Clever Chicks Blog Hop and Mosaic Monday  and Barn Charm and  The Marketplace  and On the Menu Monday and  Mix it up Monday and Make it Pretty Monday and   What's in the Gunny Sack and  Making the World Cuter Mondays and Make the Scene Monday and  Something I Whipped Up Monday and  Motivate Me Monday and  Making Monday Marvelous and Get Your Craft On and   You're Gonna Love it Tuesday and Creative Showcase and  Tweak it Tuesday and  Coastal Charm Tuesday and  Take a Look Tuesday and  Tasty Tuesday and Tasty Tuesday and Love Bakes Good Cakes and  Tempt My Tummy Tuesdays  and Overflowing With Creativity and Mom on TimeOut  and Adorned from Above and 3boysandadog and Trueaimeducation and Cast Party Wednesday and  We Did it Wednesday  and It's a Party at Creative Princess and Artsy Corner Thursday  and The Self-sufficient Home Acre and  I'm Lovin' it Thursday and  Mandatory Mooch   and Foodie Friends Friday and  Serenity Saturday and Get Schooled Saturday  and Inspiration Friday(ThursNite) and Vintage Inspiration Friday and Photo Friday and  A Favorite Thing Saturday and Sunny Simple Sunday and Market Yourself Monday and  Saturday Nite Special

Hi! And thanks for stopping in at Cranberry Morning. I love reading your comments and visiting your blogs. I am unable to respond to No-Reply bloggers, so please make sure to enable your email address on your blog. Also, many Google+ blogs don't allow me to comment because I'm not a member of Google+. So, I'm not deliberately avoiding you, but Google+ is not commenter friendly.